PENANG - Malaysia's charismatic opposition leader Anwar Ibrahim is in the dock again on sodomy charges in a suit that threatens to reverse the startling revival in his political career.

"Sodomy II Starts", trumpeted the headline of the English-daily government-linked Star newspaper on Wednesday - heralding the beginning of another season in which a litany of explicit terms from court proceedings will be reported in the media.

On Wednesday, key prosecution witness Saiful Bukhari, a former junior Anwar aide, startled the court when he testified that Anwar had asked him "Can I f*** you?" when they were alone in a

condominium. Saiful, 25, said he was afraid when Anwar, 62, allegedly approached him.

Anwar has maintained his innocence and claimed the trial is part of a political conspiracy. He intends in his defense to subpoena Prime Minister Najib Razak and his wife Rosmah, who he claims both met with Saiful a couple of days before the latter submitted a police report about the alleged sodomy. They have both vigorously denied a meeting took place.

Anwar, once the heir apparent to former premier Mahathir Mohamad and now the leader of a resurgent opposition coalition, spent six years in prison from 1998.

At the height of the 1997-98 Asian financial crisis, and after falling out with Mahathir, he was arrested and severely beaten by the country's top police officer. A year later, he was sentenced to prison for corruption and in the following year, he was convicted of sodomy. Both convictions added up to a jail stint of 15 years.

His now famous black eye and jailing became the rallying point of the reformasi movement. In those tumultuous years, the democratic aspirations of political parties and civil society groups were intricately interwoven with Anwar's plight. Behind bars, he inspired a new political party, the People's Justice Party (PKR), led then by his wife, Wan Azizah.

In 2004, his sodomy conviction was overturned and Anwar was released - but barred from contesting elections until 2008. A general election was held just before he became eligible to run, though he played an instrumental role in the PKR's campaign.

His efforts steered a loose opposition electoral pact to a stunning performance, capturing five out of 13 states and denying the ruling Barisan Nasional (BN) coalition its coveted two-thirds parliamentary majority.

Anwar promptly won a by-election and has since become the standard bearer of the fledgling opposition coalition, now known as Pakatan Rakyat (People's Alliance). The alliance brought together the PKR, the Islamic party PAS and the Democratic Action Party.
Testing times
The second sodomy trial comes at a testing time for both the premier and Anwar. Since taking office last April, Najib has promoted his "One Malaysia, People First, Performance Now" slogan to foster national unity. Urbane and articulate, the premier hopes to regain lost ground after BN parties representing minority ethnic groups were routed in the 2008 election.

But his efforts have been undermined by recent controversies, including the uproar over a High Court decision in late December that granted a Catholic weekly newspaper the right to use the term Allah in its publications. The decision was followed by a spate of arson attempts or desecration of 18 Christian, Muslim and Sikh religious sites. This week a special aide to Najib resigned after reports alleged he made derogatory and racist remarks against ethnic minorities.

The Anwar trial and the Allah controversy have distracted media attention from other simmering scandals, including the theft of two jet engines from the air force, financial losses surrounding the construction of the Port Klang Free Zone project and the BN's takeover of the Perak state government last year following controversial defections.

Anwar's coalition, too, faces problems of its own. A conservative Muslim PKR parliamentarian has broken ranks with the party's moderate stand on the Allah issue. Outspoken from PKR federal parliamentarians have also spoken out against the DAP-led state government in Penang. It is uncertain whether they might lead a few more disgruntled parliamentarians and become "BN-friendly'' independents.

To many observers it is not just Anwar now on trial, but the integrity of the judiciary and police. The black eye inflicted on Anwar and the perceived misconduct of the court proceedings in his first sodomy trial greatly eroded confidence in the judiciary and the police as impartial actors.

Bowing to calls for reforms, Mahathir's hand-picked successor, Abdullah Badawi, set up two royal commissions of inquiry - one to look into the management of the police and the other to make recommendations on judicial appointments. Though they produced some positive recommendations, few would say the image of the police and the judiciary has since dramatically improved.

Meanwhile, much has changed since Anwar's first trial. During the last trial, websites were just emerging. Now, every detail of the court proceedings is available for a more skeptical and informed public to follow on social-networking sites, blogs, independent news portals, text messages, and the government-controlled media.

Arguably, the shifting patterns of news consumption were evident in the aftermath of the attacks on religious sites. Many had initially feared the incidents could spark race-based turmoil, but most Malaysians they did not fall for the bait, sensing that these were precisely aimed to provoke them.

Changed political alignments have also helped to defuse tension. Unlike before, Malaysia has a viable political opposition coalition that has a sizeable Malay-Muslim presence, making it a harder to sell issues along racial-religious lines. For instance, PAS and PKR have adopted a more conciliatory approach towards non-Muslim usage of the term Allah - provided the term is not abused.

BN supporters may be hoping the trial will convince more Malay-Muslim politicians to cross over to their side. But the danger of a backlash is there: if Anwar is once again seen as being victimized, he could become a rallying point for the Pakatan Rakyat, reuniting the parties in the alliance and encouraging more young people to register as voters.

That could prove as disastrous for the BN in the next general election as in the 1999 vote after Anwar was first arrested, humiliated and imprisoned. The present trial may drag on for months, with a series of appeals and counter-appeals likely to turn proceedings into a high stake soap opera.

That could cost the country at a time it faces many urgent economic and social issues, not least how to revitalize the economy and devise new strategies for sustainable development in view of depleting petroleum reserves. Government plans to impose a new value-added tax to make up for revenue shortfalls is bound to be met with strong opposition.

At the same time, there is also a sense that Pakatan Rakyat, now helming four state governments, has emerged as a viable coalition with a common framework that could survive even without Anwar. The risk is that without a charismatic leader in his mould, it would be much harder to paper over emerging cracks and hold the disparate parties in the coalition together.

At the end of the day, much will depend on how a more discerning Malaysian public view and respond to the unfolding saga.

Anil Netto is a Penang-based writer.
at Thursday, February 04, 2010 No comments:
Email ThisBlogThis!Share to TwitterShare to FacebookShare to Pinterest 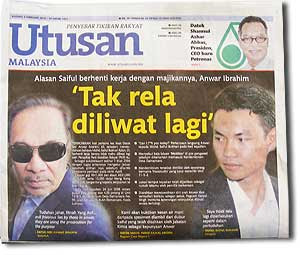