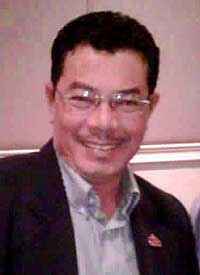 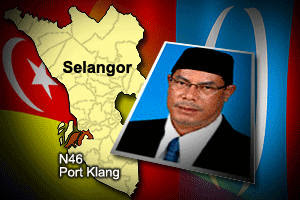 
FOTO:MALAYSIAKINI
at Thursday, October 29, 2009 No comments:
Email ThisBlogThis!Share to TwitterShare to FacebookShare to Pinterest

LETTER TO THE EDITOR/MEDIA STATEMENT

LETTER TO THE EDITOR/MEDIA STATEMENT

Law and order has completely broken down in the Perak State Assembly. What we are witnessing today is a farce that has brought down the dignity of the State Assembly.

This may be the first occasion in the entire history of parliamentary democracy when two separate Assemblies have met under one roof simultaneously presided over by two Speakers, with two different agendas tabled and debated.

This circus will be the order of the day when parliamentary procedures and principles are ignored frustrating the will of the people by underhand tactics with the assistance of corrupt politicians. Anarchy reigns supreme in the Perak State Assembly today.

This is what is to be expected when the majority mandate of Perakians are nullified by three unscrupulous political "frogs" who betrayed their mandate by switching party and making a mockery of Parliamentary democracy.

For this chaotic situation in the Perak State Assembly, the Barisan Nasional must be held accountable. It is they who masterminded the toppling of the Perak Pakatan State Government. It was our Prime Minister who engineered the fall of a duly elected government of the people. For all his talk of democracy and 1Malaysia, he has miserably failed to unite the people or persuade them to share his vision for the nation.

Even at this stage, it is never too late to right the grievous wrong to put matters right. The only solution is to dissolve the Perak State Assembly to seek a fresh mandate of the people. If the BN is very confident and is convinced that Perakians are solidly behind the BN, this is the time to put that belief to the test.

at Thursday, October 29, 2009 No comments:
Email ThisBlogThis!Share to TwitterShare to FacebookShare to Pinterest

“Anwar Ibrahim and many of the opposition leaders have this false feeling of grandeur… but are not grand and certainly far from great.

“They did not make March 2008 happen. The people made it happen. And what the people make the people can break. And the people are of the opinion that the opposition leaders, Anwar included, have lost their direction.”

at Thursday, October 29, 2009 No comments:
Email ThisBlogThis!Share to TwitterShare to FacebookShare to Pinterest