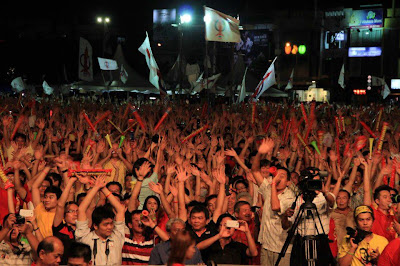 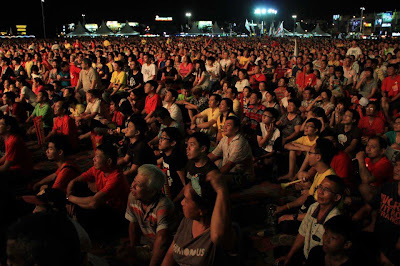 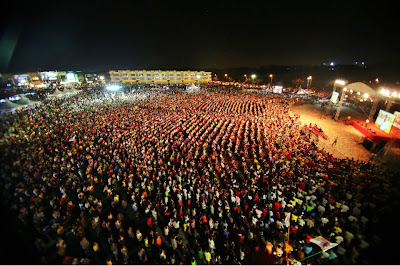 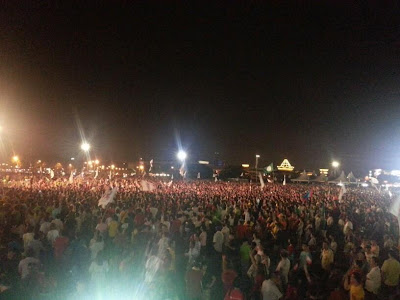 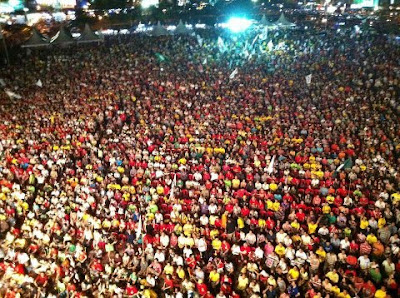 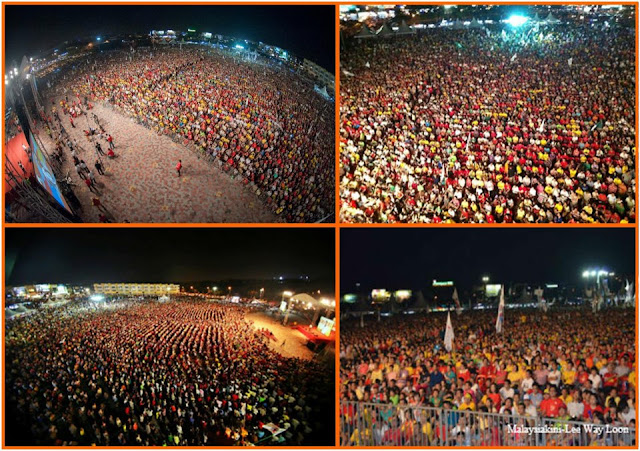 at Thursday, May 02, 2013 No comments:
Email ThisBlogThis!Share to TwitterShare to FacebookShare to Pinterest


By Lim Kit Siang
I call the Election Commission to convene an all-party roundtable conference for all political parties to forswear the politics of fear and blackmail in the 13th General Elections and to accept any peaceful and democratic change of government, whether at the Federal or state level, if this is the verdict of the electorate.
This is most urgent and imperative for two reasons: firstly, the increasing incidents of the politics of fear, blackmail, gangsterism and violence in the run-up to the 13GE; secondly, the possibility that the 13GE will herald the first change of federal government in 56 years through the ballot box, namely the formation of a Pakatan Rakyat Federal Government in Putrajaya following the ousting of the Barisan Nasional Federal Government through the democratic process.
I have received information that the Bukit Aman and Defence Ministry intelligence do not rule out the defeat of Barisan Nasional in the 13GE. According to one Bukit Aman intelligence estimate, which I cannot verify whether it is from the police or not, the possible outcome of the 13GE for parliamentary elections is as follows:

According to this estimate, PR will win 145 parliamentary seats compared to 77 for Barisan Nasional – or a majority of 68 seats.
This is well beyond my “dream” results for the Pakatan Rakyat in the 13GE – which is PR winning 125 parliamentary seats or a majority of 28, distributed evenly among PKR with 45 seats and DAP and PAS each winning 40 seats.
With the possibility for the first time in more than five decades of Malaysian history of a democratic transition of power through the ballot box, the onus is both on the Election Commission and the police to ensure that a democratic transition of power will be a peaceful and orderly one.
I welcome the reminder by the former Inspector-General of Police, Tan Sri Musa Hassan urging politicians to stop “putting fear in people” by making statements about possible racial tension or riots should there be a change in government in the general election.
Musa took issue at a forum on smooth and peaceful transition of power in Kuala Lumpur with recent statements by both Umno Wanita chief Shahrizat Jalil and former prime minister Dr Mahathir Mohamad.
Shahrizat had warned of a repeat of the May 13, 1969 racial riots during her policy speech at the Umno general assembly November last year, while Mahathir recently wrote on his blog that I would attempt to drive a wedge between the Chinese and the Malays in my campaign for Gelang Patah.
“As leaders, they should advise the people to be calm in selecting a government of their choice,” said Musa, who has been vocal in his opinions since his retirement.
Musa said: “For me, (the statements) are almost like sedition (menghasut).”
Here is a case where a former Inspector-General of Police is of the view that a former Prime Minister had been guilty of sedition. But would the Attorney-General Tan Sri Gani Patail act independently and professionally to arrest and charge the former Prime Minister, Tun Mahathir, for the offence of sedition in raising the spectre of racial conflict to scare the voters from freely exercising their constitutional right to vote.
I fully endorse Musa’s criticism of the police authorities for failing to act independently and professionally where the culprits come from UMNO and Barisan Nasional.
Musa argued that the enforcement system would need an overhaul should there be a change of government in the May 5 election.
The Pakatan Rakyat is fully committed to bring about such an enforcement of the police force, to ensure that the police could restore public confidence in their efficiency, professionalism and independence so that they could reduce crime and make the country and public places safe again for citizens, investors and tourists as well as establish an Independent Police Complaints and Misconduct Commssion (IPCMC) to deal with public complaints of abuses of power and corruption against the police.
at Thursday, May 02, 2013 No comments:
Email ThisBlogThis!Share to TwitterShare to FacebookShare to Pinterest

at Thursday, May 02, 2013 No comments:
Email ThisBlogThis!Share to TwitterShare to FacebookShare to Pinterest 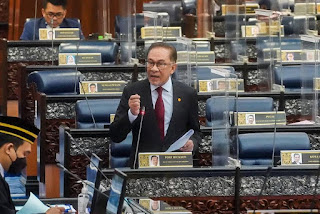