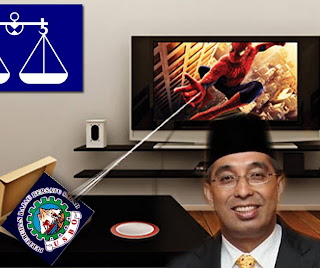 at Friday, November 26, 2010 No comments:
Email ThisBlogThis!Share to TwitterShare to FacebookShare to Pinterest


at Friday, November 26, 2010 No comments:
Email ThisBlogThis!Share to TwitterShare to FacebookShare to Pinterest


at Friday, November 26, 2010 No comments:
Email ThisBlogThis!Share to TwitterShare to FacebookShare to Pinterest

The benefit of being Malay first

The benefit of being Malay first

ARE you Malay first? Or Malaysian first? That is the current rhetoric in some parts of our political landscape and is spurring some Malaysians to engage in a contest over what it means to be Malaysian.

For certain the question is not a new one. The DAP has for the longest time been brandishing the motto of “Bangsa Malaysia” in an attempt to dismantle the Barisan Nasional (BN)’s race-based politics. DAP advisor Lim Kit Siang, for one, is nowhere close to letting up on this issue. He has demanded repeatedly for, especially, Umno politicians to declare if they are Malaysian or Malay first.

And while Tan Sri Muhyiddin Yassin seemingly failed the test question, Datuk Seri Nazri Aziz recently scored some points by declaring he was “Malaysian first and Malay next”. But is the question really about which should come first? Why does it seem to matter so much? And which of the two labels — one about race and the other about citizenship — is more profoundly important to us as Malaysian citizens?

If there’s anything that we’ve learnt from our series of Found in Malaysia interviews, it’s that our identities are far more complex than, first, the British colonialists and now, the BN government would like us to believe. Just read some of the stories from the Malay Malaysian personalities we’ve featured. Chef Wan has Japanese and Indonesian ancestry in him, national squash player Mohd Azlan Iskandar is European, Indian, Malay and Chinese all in one, and Tan Sri Rafidah Aziz who is featured exclusively in the Found in Malaysia book is, in her own words, of pendatang stock since her ancestors were from Sumatera.

And so, one wonders why someone like the deputy prime minister, who is also Umno deputy president, feels compelled to respond to Lim’s challenge by making his Malay identity more important than, in this instance, his national identity. Why was it not possible for Muhyiddin to have replied that he was both Malay and Malaysian with neither one identity being more important? After all, our racial identities are far more complex than the tightly contained boxes we are expected to tick.

But this isn’t just about Muhyiddin although what our deputy prime minister, who is also education minister, says has implications on politics in Malaysia. It is about a larger issue of why being Malay to some is far more critical in Malaysia than placing equal or more importance on being Malaysian.

This is where I find a commentary by Deputy Education Minister Dr Puad Zarkashi and the remarks by Prime Minister Datuk Seri Najib Razak at the end of September at the United Nations rather disingenuous. Our racial diversity, we are told, is an asset, not a liability, that is cherished.

These claims, however, belie the fact that it is really far more advantageous to be a Malay citizen than a non-Malay citizen in Malaysia. From quotas for education and housing to promotions in the civil service to becoming prime minister, it cannot be denied that the system in place clearly favours Malays over non-Malays primarily on the basis of race.

And so if it’s clear that there are two classes of citizens in Malaysia — Malays and non-Malays — it is only logical to expect the growing incidence of name-calling of non-Malay Malaysians whether in political rallies, Biro Tatanegara programmes or in schools. In order to maintain the paradigm of ketuanan Melayu that is repeatedly used to justify continued Malay privileges and dominance, one must not ever admit that regardless of race, we are, as citizens, all actually the same and hence deserving of equal opportunities and treatment.

No surprise then that the likes of Muhyiddin are not about to declare they are Malaysian first. Similarly, that would also explain just why Puad, who is an Umno supreme council member, would so quickly label the likes of Nazri as suffering from “Malayphobia”. Those who declare themselves as Malaysian first, Malay second, are dangerous because they are violating the constitution and Umno’s raison d’etre, charged Puad.

Herein lies the weak link to the BN’s claim that it believes in the vision of 1Malaysia. How can citizens believe that the government, especially Umno, cherishes our diversity if it consistently favours one racial group of citizens over others?

Any attempt to reframe the equation so that all of us are the same — from a citizenship point of view — would of course be seen as a threat. After all, such thinking could just dangerously lead to changing the equation of privilege and superiority to one of equality.

Inclusive instead of exclusive

And that’s why Nazri‘s remarks made him such an instant hero in some circles. No matter the actual motivation for his remarks, this is what I suspect many people heard him say. That it was more important to him to belong to a group of people (“Malaysians”) where everyone was the same than it was to belong to another group of people (“Malays”) who enjoy exclusive privileges at the expense of others.

For many Malaysians, including me, saying “I am Malaysian first” is not about denying the cultural heritage of our respective ethnic groups. It is about reclaiming an identity that is inclusive instead of exclusive. It is about contesting the equation of Malay privilege so that no citizen needs to feel disadvantaged because of their race.

For certain, our identities are not one or the other, and cannot be limited to just race or nationality. Class, gender, sexuality, and religion are other aspects of identity that have been sidelined in this debate about being Malaysian. Indeed, depending on context, one aspect of our identity may be far more important than another with no contradiction at all to who we are. When Malaysians are overseas for example, it’s the most natural thing to say, “I’m Malaysian” instead of “I’m Malay/Chinese/Indian/etc”.

Still, if Umno politicians, or any other politician for that matter, want us to believe that 1Malaysia is for real, they best start talking and acting in ways that demonstrate they believe in an equation of inclusivity instead of exclusivity. The sum result, after all, is in the proof.