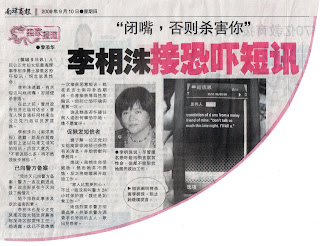 “SHUT-UP, OR ELSE YOU’LL BE KILLED”JOYCE LEE RECEIVED A “DEATH THREAT” SMS (Penang 9th September 2009) PKR Wanita Central Committee member, Dr. Joyce Lee received an anonymous “death threat” SMS, threatening to take her life! Joyce revealed that the SMS warned her to be quiet, otherwise she will be killed.

Before this matter, during the Selangor temple relocation dialogue, a dialogue participant threatened to rape Selangor Exco YB Rodziah, who is also a Wanita PKR. Joyce said she received the SMS text message in Bahasa Malaysia the night before yesterday, with the content something like: “shut-up, if not I will kill you.”

“I already lodged a police report yesterday, and the police have been following up this case, the special branch even contacted me today for further investigation.” She did not rule out the possibility that the threatening SMS could be related to the conspiracy to drive her away from the political career.

Joyce Lee is also PKR Taman Inderawasih Branch Chief and Batu Kawan Division Information Chief. She further disclosed that this was not the first time she received vicious text message. She encountered threatening and abusive SMS when she was helping in the Bukit Selambau by-election, while the latest “death threat” SMS was the first time she ever came across. Asked if she knew who the perpetrator was, she refused to comment.

URGE FOR THE ARREST OF THE PERPETRATOR

It is understood that the Wanita PKR top leadership is informed about the related news, and some had showed solicitude for Joyce. She reiterated her life may be in danger, but she is not worried, and she will continue with her political works.

“My family is worried than I am about this matter, but I did not ask for police’s 24 hours protection, I still work as normal.” She has appealed to the police to wage an extensive probe into the matter, by requesting the police to investigate the mobile phone number’s owner, so to seize the perpetrator.


(Human Being)Of course he is not. He is doing a grand service being elsewhere. Yet I wonder at the effectiveness of it for the general public. This is his reality and the public’s perception. Nonetheless, being a commentor it is only our escapism for the moment to voice our approval or dissent while ensuring everything in our lives is status quo.

P. Waytha Moorthy, the HINDRAF chairman who was initially applauded, praised and forewarned not to return prior to March 8, 2008 and up to the Kg Buah Pala issue is now cursed, accused and branded for seeking what is the truth in the Kg Buah Pala issue and his approach for acting without fear or favor. Again, being a commentor, it is only our escapism for the moment to voice our dissent while ensuring everything in our lives remains unchanged.Very identical situations faced by these two individuals in sacrificing their way of lives for the benefit of the society. Yet, one is praised while the other ostracized.


Such irony is only for the Malaysian folks as Kita Cepat Lupa for own alliance is well measured for our own needs against the hope we wish to create.Hope is what these crusaders embark on to keep trying when there seems to be no hope. The hope in us individually is the trumpet of conscience in order to revive the truth for society and humanity.Sure, RPK is all about good governance and revealing all the juicy tales to invoke mind boggling revelations that started since the Reformasi days of 1999, and two elections passed with the largest mandate handed over to BN in 2004.


HINDRAF is a novice compared to RPK in the blogosphere, coming alive only months before November 25, 2007 and created the climate change in the General Election of 2008. Now, don’t jump the gun and make an assumption that HINDRAF is more effective than RPK or all the big guns in the opposition. Personal assumption against public goodwill has always been the downfall of the opposition or shall I say why BN has been able to triumph for 52 years.While we the public continue to debate and digest the input, we fail to understand that the one that is praised and the one that is ostracised sing the same song though in a different key.


They are enforcing different methods to get us out of our own comfort zone in our inaction due to our self centred individual notions whether in anticipation or hoping something good will happen. Nothing is going to happen unless and until we understand the concept of what makes a society rather than the individualism that prevail in us.If only we, the public, will support any cause as long as it is a humanitarian cause without regard to race, religion, color or creed, nor the assumption that what you see is the only truth. Only then will you be able to see no distinction between RPK and P. Waythamoorthy in their their exiles to enhance a proactive and effective action by Malaysians to fulfill the society’s need.See beyond the box - be constructive, be critical, be just and fair.


That is all that is expected if truth is what you seek to enhance a humanitarian cause for Malaysians.Let’s stop the witch hunt that satisfies your own ego and your half formed knowledge and rather, pursue the goodwill of society and humanity minus your assumptions.My dear Malaysians.


It is not an individual battle but a collective battle for the society against a system, a mechanism that has created androids in us against humanitarian values. Get over it and be real and know that the idealism in RPK and HINDRAF is possible when we can collectively act for the well-being of a Malaysian society.
at Sunday, September 13, 2009 No comments:
Email ThisBlogThis!Share to TwitterShare to FacebookShare to Pinterest 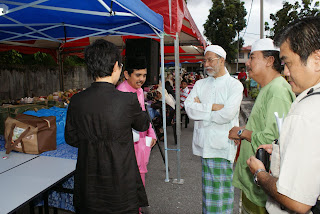 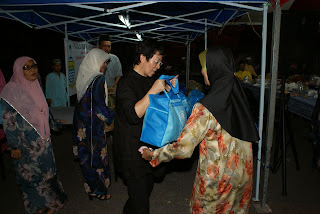 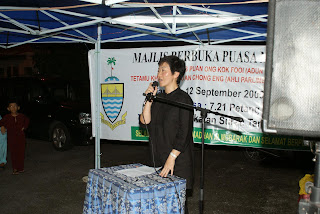 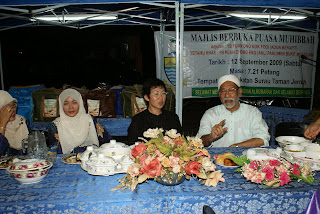 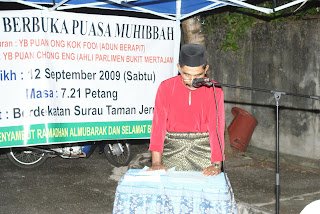 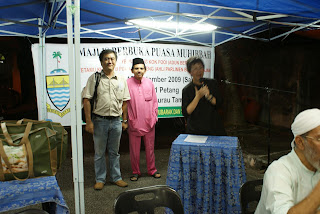 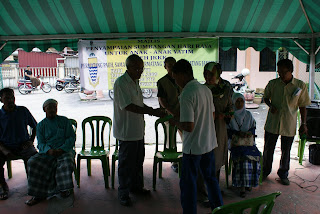 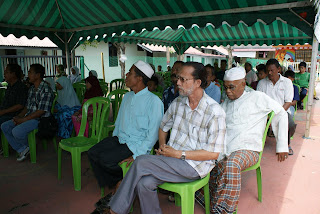 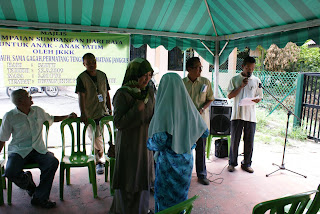 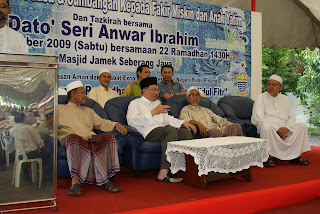