KUALA LUMPUR - Anwar Ibrahim may be facing the final battle of his epic political career. The Malaysian opposition leader will stand trial on February 2, accused of sodomizing his former aide, a charge he has said was trumped up to foil his plans to seize state power in the next general election. "They want to derail my plans to become prime minister, to rewrite the history of this country, to end the injustices and violence against the people,'' Anwar said at a recent rally outside Kuala Lumpur. "I am facing a horrendous ordeal. It's all politics, a conspiracy to derail the reformation of society,'' he said as scores of supporters mobbed and hugged him.

Anwar is attracting thousands of people to his rallies across thecountry ahead of a trial that some political analysts say will make or break his four-decade-old career in politics. He was jailed on the same charges a decade ago after trial that was universally rejected as biased, and released after Malaysia's highest court declared him innocent. "The trial can adversely impact his political career and that of the [opposition] Pakatan Rakyat coalition that he leads - and even the reformation struggle he has led for so long,'' said Sivamurugan Pandyan, a political scientist with the University Science Malaysia. "It all depends on what happens at the trial and how the case is handled,'' he said, adding that Anwar's 1999 sodomy trial was a public relations disaster for the government because many people rejected the guilty verdict. In 1998, Anwar figured in a political power struggle with Mahathir Mohamad, then strongman premier of the multi-racial Southeast Asian country.

The 1997-98 Asian financial crisis was the backdrop of that power struggle. Anwar, the finance minister and Mahathir's deputy, was sacked as the economy shrank and the Malaysian currency, the ringgit, plummeted. Mahathir declared Anwar unfit to lead because of alleged "homosexual tendencies'', promptly sacked him and later had him arrested under security laws that allowed for detention without trial. Anwar was subsequently charged with corruption and sodomy and convicted to 15 years in jail. He launched a political party, Parti Keadilan Rakyat, or People's Justice Party, and a reform movement from jail. Six years into his sentence, he was released after the country's Federal Court acquitted him of the sodomy charges.

In 2008, Anwar put together the Pakatan Rakyat opposition, a coalition of dissimilar political parties, including his own PKR, the ethnic Chinese-majority and secular Democratic Action Party and the Pan-Malaysian Islamic party. The coalition seized five states at the March, 2008 elections, ending the two-thirds parliamentary majority the ruling Barisan Nasional had enjoyed for half a century. Those electoral gains brought Anwar one step closer to Putra Jaya, Malaysia's purpose-built political capital. In March 2008, new shockwaves hit the country. Anwar was arrested, questioned and subsequently charged with sodomy against his aide, Saiful Bukhari, setting the stage for the February 2 showdown. Under Malaysian law, sodomy is punishable by 20 years in prison. If Anwar is found guilty and jailed, the decision would setback his impressive political comeback and reform agenda. Notwithstanding the trial, Malaysia is gradually changing under the leadership of Najib Razak. In the view of many people, the urbane prime minister has done an admirable job since taking over the country in April last year.

"He has co-opted the change agenda from the Pakatan,'' Denison Jayasooria, a political scientist with the National University of Malaysia, said. "He is making the changes that the country needs and he is gaining political mileage with his reform agenda." Gradually, reform of the government and society is taking place under the 'One Malaysia' concept," he said, referring to Najib's idea of uniting the country's different races and distributing resources in a fairer manner. Anwar's political agenda has likewise promised dramatic reforms. His coalition released a "Common Policy Platform" document in December outlining the major changes they would make if voted into power in the next general election, which many expect to be called next year even though the government's term officially ends in 2013.

A key pillar of the document outlines affirmative action for all Malaysians, rather than helping only bumiputra, or native Malays and indigenous people, as outlined in the country's 1970 New Economic Policy. The Pakatan agenda also promises to reduce federal power and grant states more freedom to manage their resources, including a bigger share of oil and gas revenue. "The Pakatan is offering in form and substance an alternative vision of how to build a new Malaysia, starkly different from what the Barisan has offered in five decades of misrule," said former parliamentarian Sim Kwan Yang. "It is a far superior, just and urgently needed vision,'' he said. "We need a new Malaysia.'' The upcoming sodomy trial is just one dimension in Anwar's struggle against entrenched forces, political analysts said. "We are very worried about what will happen to Anwar. We do not want to see him jailed again on trumped-up charges,'' said Lim Kit Siang, a veteran parliamentarian who was first elected in 1969. "But as a united Pakatan coalition, we are ready to struggle on for reform and democracy. We will battle on."

Aliran is outraged by the senseless acts of sacrilege committed by mischief-makers who had deliberately left pig heads in two mosques in Petaling Jaya. This morning worshippers found these heads at the Masjid Jumhuriyah in Taman Dato Harun and the Al Imam Al Tirmizi mosque at Taman Sri Sentosa.

Whoever committed this unforgivable sin clearly has no respect for the sanctity of places of worship. Coming as it does after a spate of desecrations of places of worship involving 11 churches and a convent, a Sikh temple, a mosque and two suraus across the country, it is very obvious that trouble-makers are hard at work to destroy our peace and harmony.

Whether it is politically motivated or otherwise, the repercussions of these criminal acts can be very dangerous and damaging to our fragile ethnic relations which has come under extreme test following the “Allah” issue.

It is worrying that there are opportunists and extreme elements at large who are intent in exploiting this emotive issue to stir up trouble and cause disunity. It is very apparent that certain quarters will stoop very low not bothering about the consequences of racial strife.

Aliran would like to appeal to the vast majority of Malaysians who are rational, peace-loving and accommodating not to subscribe to the the intolerance propagated by unruly elements in our midst bent on wrecking our unity. We should reject these unscrupulous and misguided elements and stand solidly together to preserve and protect our peace and harmony.

We call on the police to be relentless in bringing these dangerous people to book. Their priority should be in tracking down these scoundrels so that the weight of the law would land on them heavily before they attempt to do more damage.

Police Investigation on Mosque Attacks must pursue the political operators

We the undersigned civil society groups condemn in strongest terms the utmost sinister act of throwing heads of wild boar into the compound of two mosques on Old Klang Road in the early morning hours of January 27 (Wednesday).

Like the cow-head protest in Shah Alam in last August and the earlier attacks on churches, mosques, suraus and gurdwara, the desecration of the At-Tirmizi Mosque, Sri Sentosa and Jumhuriyah Mosque, Taman Dato Harun is the latest of deliberate and desperate acts to provoke religious conflicts in Malaysia.

Malaysians of all faiths have however once again gloriously defeated such wicked plot. The desecrated mosques and the Muslim community at large have demonstrated admirable calm and cool-headedness, just like the Hindu, Christian and Sikh communities before this.

As in the past, Malaysians of other faiths see the attack on Islam as an attack on their own faiths. In an immediate response, the Malaysian Consultative Council of Buddhism, Christianity, Hinduism, Sikhism and Taoism (MCCBCHST) has condemned any such violence on any house of worship as “a sin of the highest order”.

The inter-faith solidarity of Malaysians is a clear and loud testimony that Malaysian society has passed another test on communal relations and emerged only ever stronger than before. No cow head, pig head or fire can set fraternity and goodwill amongst Malaysians on fire. The agent provocateurs are only burning themselves in both legal and spiritual senses.

The towering success of Malaysian society on interfaith relations is however tarnished by the continuous failure of Malaysian state on law and order. The Police must stop dismissing such attacks as vandalism or youth delinquency, which no thinking Malaysians will believe.

The provocations are clearly political. To end this serial attack, the police investigation must look into political motives and pursue the political operators behind the scene.

We however object any use of Internal Security Act or Sedition Act. No one should capitalize on the pain of the religious communities to rejuvenate authoritarianism. The culprits must be charged in Court under Penal Code or other relevant laws. We demand all ISA detainees – including the latest 12 - be charged in court or released unconditionally. 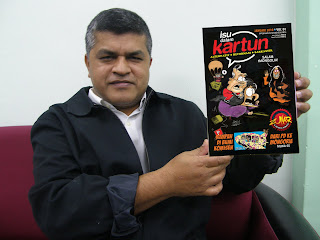 
at Friday, January 29, 2010 No comments:
Email ThisBlogThis!Share to TwitterShare to FacebookShare to Pinterest

Statement By Civil Society Organisations (CSOs) on the recent demolition of the houses at Rumah Nor, Sungai Sekabai

We the concerned civil society organisations (CSOs) having met and deliberated in Sibu on 23 January 2010 on the recent news of the demolition of houses belonging to the residents of Rumah Nor Anak Nyawai, Sungai Sekabai, Sebauh, Sarawak on the 19 January 2010 express utter outrage and deep concern on the blatant disregard of the communities’ customary rights and their right to shelter. The actions of Tatau Land Sendirian Berhad, a subsidiary of the ASSAR Group and their agents together with the authorities were uncalled for since the residents of Rumah Nor are still contesting the land dispute claim over the area.

1) Tatau Land Sendirian Berhad and its agents withdraw from the area and refrain from further actions that will aggravate the situation;

2) The authorities must immediately stop their harassment and intimidation on the communities affected;

3) The authorities must uphold the rights of the indigenous peoples, including rights to their land, territories and resources, the principle of free, prior informed consent, the principle of natural justice as in accordance with the national legislations and international human rights instruments including the United Nations Declaration on the Rights of Indigenous Peoples (UNDRIP), ILO Convention No. 169 and the Convention of Biological Diversity (CBD);

4) The company must respect the rights of the indigenous peoples and also the due process of law in this case; and

This statement is endorsed by:

For more information, kindly contact Mark Bujang of BRIMAS at markbujang@gmail.com or cell phone no. 014-8776685.