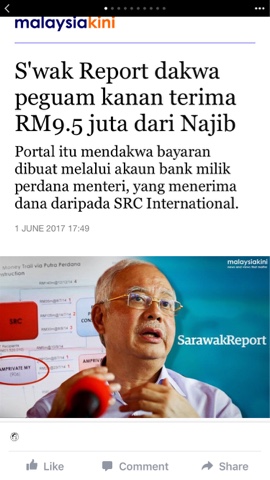 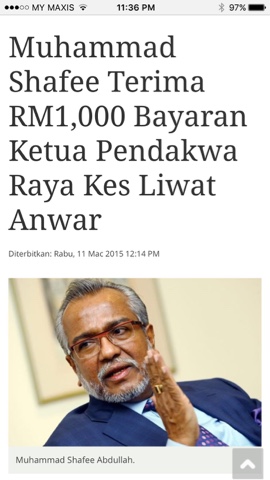 Pascal Najadi
The son of the assassinated former chairman of AmBank, Hussein Najadi, has told Sarawak Report that he has deep concerns about the way the lawyer Mohd Shafee Abdullah controlled events after his father was shot in broad daylight in KL.
The shocking event took place just a few weeks before another huge personal payment by Prime Minister Najib was made to Shafee of RM4.3 million.
The payment was transacted on 11th September 2013, whereas Najadi was murdered on 29th July.  Once again, the money came  from Account no: 2112022011906 in Najib’s name, which was funded by money stolen from 1MDB’s subsidiary SRC.

Payment by Najib to Shafee from the 1MDB funded AmBank account
Pascal Najadi, who was in Moscow when the tragedy occured, says that neither he nor his immediate family knew Shafee and no one had contacted him to be involved. Nevertheless, the lawyer mysteriously arrived at the hospital almost as soon as his father’s body was brought into the mortuary and started to take charge of events.
Photographs even show Shafee on the scene as an ambulance bearing Najadi’s injured second wife arrived, bringing Najadi to the mortuary:

Arrow points out Shafee in the background as the victims arrived at hospital
According to Najadi, the family soon found that this strange lawyer was muscling in on their situation and insisting on taking control. Pascal has testified:

Tuesday July 30 2013, it must have been lunch time or a little later in KL, my mum Heidi Najadi called me from the KLK Morgue where they have laid up the body of my late father… She asked me “there is this Dato Shafee running around rude and nervous acting as if he owns the body of dad and giving orders to all of us?!” I asked my mum, who? She said “His name is Dato Shafee..?!” I told my mum to pass this man on the phone to me.
This is my perception of this call. Dato Shafee was nervous when talking to me, he was breathing short and gave half clipped words answers to my question: “Can we wait with the burial please?” He stuttered to me: “No can not, all is in hand, I take care of all, he will be buried today, this evening…”

Pascal says he was shocked by the haste and by manner in which decisions were taken out of his family’s hands. He says a swift burial was not their custom and he had wanted to be able to fly to KL to attend the ceremony.

Shafee did not say “I am so sorry for your terrible loss….or can I help you are you OK? Where are you now? ” He said nothing of what a normal human or indeed a friend would say.
Shafee was the ad hoc burial master for the body of my late father Hussain without any reason, he even had the service paid every penny of it to make it fast and swift”,

says Najadi in his statement.

“I am taking charge”

Shafee, Scivetti and another joint foreign client on drugs charges
Speaking to Sarawak Report Pascal Najadi says that Shafee had told the family that he had been ‘put in charge’ of matters, but he never explained by whom.
Shafee, whom he described as brusque and nervous, managed the entire funeral and all the related matters, yet Najadi says the family never received a bill from him.
An email exchange with Shafee Abdullah (copied to Tania Scivetti his legal collaborator and later wife) confirms Najadi’s claim that the lawyer had put himself in charge of events, telling Pascal “I am taking care of the funeral”.
The lawyer even swept aside the son’s request to have words read out at the funeral, which was being held before he could get to his father’s side, saying “it is impossible to read the eulogy you prepared in a Muslim funeral setting” – then, imperiously he declared “I will make sure Hussain gets the best send off” despite refusing to wait a few hours for the arrival of his son:

Curt response from a bossy stranger – the only words Najadi received in writing from Shafee Abdullah
Pascal, who describes himself as having been in shock and frightened at the time, soon decided that the situation KL was not safe for his mother and himself and they fled the country, leaving much unfinished business in the process.
However, the role and the behaviour of Shafee has always bothered him, in particular the question over who had so swiftly assigned him to these duties and paid for his services?

Assigned by Najib?  If so, why?

Najadi says there is no evidence that Shafee had any prior connection to his deceased father.  Rather, he says, he later learnt that the lawyer was extremely close to Prime Minister Najib Razak, against whom his father had just made some extremely serious reports.
In the days prior to his mystery assassination Hussein Najadi had, according to his son, first made a formal complaint to the Bank Negara about information he had received about Najib’s huge private bank accounts at AmBank, where Najadi had once been Chairman.
Secondly, just days before his death, Najadi had made a police report about a threatening text to ‘back-off’ the matter, allegedly sent from within the Prime Minister’s Office.
In a written statement made in July 2015 Pascal Najadi told his lawyer:

“I went through the lifelong email archives of my late father to perhaps find a friendly or a business email between the two, I can confirm here, not one email nothing, no trace of contact. Shafee appeared like a flash out of nowhere buried my dad and disappeared into thin air, no call no nothing (!) He vanished fast and without a word like he appeared from nowhere on July 30th 2013. Never heard of the man again…. only after the killing I found out that this Shafee is the de facto lawyer for Najjib and UMNO and is the man who also was hired to put Anwar away. [Pascal Najadi, statement July 2015]

Pascal Najadi says he is now openly questioning whether Najib’s RM4.3 million payment from Najib so soon after these events may have been linked?  He says he has also noted that it was also shortly after his father’s tragic demise that Shafee was given the honour of the title Tan Sri:

“We are still puzzled why and how he surfaced on to the gruesome macabre scene taking charge of the burial. To this day today Shafee, who got promoted to Tan sri right after this horrible event, and his role are a mystery to me.”

Pascal Najadi says that if his concerns are misplaced, then all Shafee needs to do is to give him full disclosure about his role and how all his costs were covered.  Meanwhile, there was another strange intervention, which he says has also bothered him, especially since he now realises it was also linked to Shafee Abdullah.
He had had struck a recent acquaintance, says Najadi, with another KL legal practioner Tania Scivetti. Scivetti’s practice is perhaps best known for supporting high-profile foreign drug offenders caught in Malaysia.  On a number of occasions, she has worked with Shafee to represent them and get them repatriated.

Shafee and Scivetti worked together to assist this and other foreigners who had got into trouble with Malaysian law
What Pascal Najadi was not aware of was that Sciavetti (a non-Muslim) was already the common law wife of Shafee Abdullah, whom she later married in the UK.  Shortly after his father’s death Tania called Pascal to offer her legal services and to help put his father’s affairs in order.
In particular, she offered to get the locks changed on Najadi’s offices and to hire a guard to prevent intruders taking documents.  The staff were removed.
Pascal said that he agreed to the suggestion, based on his acquaintance with Scivetti.  For some days Scivetti managed Najadi’s affairs and had total control of all access to his office and his papers.  Then, she ceased answering calls and terminated her services.  This was one email from Pascal, to which she did not reply:

Scivetti abruptly terminated services with the Najadis they say
Pascal Najadi, who claims his father’s murder has never been properly investigated in Malaysia, has told Sarawak Report that he has been left wondering if Scivetti and Shafee were in fact working together on his case, as in so many others?
If so, he wants to know who prompted them to get in touch and get busy over his father’s death and who paid?

“I want to know if Najib’s multi-million payment to Shafee Abdullah so soon after my father’s death was connected” he told Sarawak Report. “We know this money came from 1MDB so we have a right to know if it was and if so why?  If it was not connected then what was the payment for and who covered Shafee’s costs instead?”

at Saturday, June 03, 2017 No comments:
Email ThisBlogThis!Share to TwitterShare to FacebookShare to Pinterest 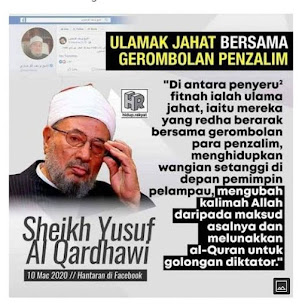