at Saturday, September 20, 2014 No comments:
Email ThisBlogThis!Share to TwitterShare to FacebookShare to Pinterest


at Saturday, September 20, 2014 No comments:
Email ThisBlogThis!Share to TwitterShare to FacebookShare to Pinterest

at Saturday, September 20, 2014 No comments:
Email ThisBlogThis!Share to TwitterShare to FacebookShare to Pinterest

PETALING JAYA: Three potential candidates for the Selangor mentri besar post have been granted audiences by the Sultan of Selangor for him to assess their suitability for the top job.
The three are PAS state executive councillors Iskandar Samad and Dr Ahmad Yunus Hairi and PKR deputy president Azmin Ali.
Their audiences with Sultan Sharafuddin Idris Shah took place separately at Istana Kayangan in Shah Alam earlier this week.
It is understood that the meetings were part of the final steps towards a decision on who is best able to replace outgoing Mentri Besar Tan Sri Khalid Ibrahim.

The swearing-in of the new mentri besar has been confirmed to take place on Tuesday with the invitation cards already sent out.
Sources said the three assemblymen were informed that the royal audience was a sort of “interview” to enable the Sultan to evaluate them and have a better idea of their capabilities and personalities.
It is learnt that the others who sat in included state secretary Datuk Mohamed Khusrin Munawi, state legal adviser Datuk Nik Suhaimi Nik Sulaiman and two members of the Selangor Royal Council.
The sources said each audience lasted more than an hour and that the “interview panel” was very civil and cordial.
The assemblymen were advised to be on standby and told that they would be informed accordingly. It is likely that the name of the next mentri besar will be known by Monday.
Iskandar is the state PAS chairman and Cempaka assemblyman while Dr Ahmad Yunus is the assemblyman for Sijangkang.
Azmin is Selangor PKR chairman as well as Bukit Antarabangsa assemblyman and Gombak MP.
Sources said Azmin met Datuk Seri Anwar Ibrahim on Thursday to personally inform the PKR adviser of the audience with the Sultan as he did not want Anwar to misunderstand the situation.
It is learnt that Anwar took the news positively and agreed that it was “time to move on” contrary to claims that PKR and DAP would push for a snap state election if Datuk Seri Dr Wan Azizah Wan Ismail was not chosen.
The two PAS candidates were among the three names that the party presented to the palace in compliance with the Sultan’s request to have more than two names for his consideration.
The palace had asked each of the three Pakatan Rakyat parties to present more than two names for the Sultan’s consideration but DAP and PKR proposed only Dr Wan Azizah on the grounds that 30 state assemblymen had signed statutory declarations supporting her for the post.
The palace subsequently said the Sultan would exercise his prerogative to choose the next mentri besar from the list of PAS names or from a name outside the list.
The mentri besar crisis was sparked off by the Kajang Move, which began with the sudden resignation of assemblyman Lim Chin Cheh. It caused a rift between PAS and the other two Pakatan parties and has dragged on for more than half a year.
at Saturday, September 20, 2014 No comments:
Email ThisBlogThis!Share to TwitterShare to FacebookShare to Pinterest 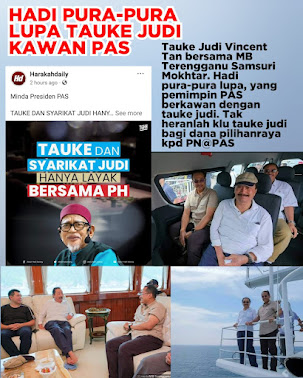