Isn't religion a sacroscant right of a community?

Subject: Isn't religion a sacroscant right of a community?

Isn’t religion a sacrosanct right of a community?

Umno has decided to play politics by agreeing to release the Malay-language
Holy Bible without loss of face. That is the reason why it has to impose two
ridiculous conditions for the release, says P Ramakrishnan.


It is rather difficult to understand how our Muslim friends can be so easily
influenced which may result in their straying away from their sacred religion.
Any notion that this may be the case insults the intelligence and the very
faith of the Muslims.

Any suggestion alluding to this possibility gives the impression that all the
daily vigorous religious programmes over radio and television, the numerous
courses conducted to explain and strengthen their faith in Islam, the many
religious classes and the obligatory five-times-a-day prayers, the existence of


mosques easily accessible to the faithful, and the Friday sermons, are a
failure. This is absolutely wrong and ridiculous.
I was a product of a mission school – so were my many Malay friends of that
period. The Lord’s Prayer was part of the weekly school assembly ritual. Even
to this day we – Muslims and non-Muslims – remember the Lord’s Prayer. In
fact, some of my Malay friends even say “Amen” at the end of a speech whenever
our classmates meet up. This did not in any way indicate that they are not
steadfast in their faith. No one has renounced their religion to embrace
Christianity.
How is that the Malays of that period – who did not have all the present
intense propagation of the Muslim faith – remained faithful to Islam? How come
their faith was so strong and so secure?
It is with this knowledge that I wonder what harm the Holy Bible in the
national language can cause to the Muslims. Why is there so much controversy
surrounding this issue?
There are so many contradictory reasons extended for the impounding of the Holy

Bible. These holy books are languishing in various godowns, some as long as two

years. This denial of the holy book to the Christians is indefensible.

A pertinent question is “Aren’t the Christians entitled to their book of
faith?” It is this book that gives meaning to their lives, regulates their
conduct and determines their purpose in life. It is so essential to their
well-being, it is so personal and integral to their existence. How can this be
denied?


majority of Muslims are tolerant, peaceful, respectful of the other, and would
have no objection to other Malaysians exercising their religious rights as
guaranteed by the Federal Constitution. They would have no objection to the
releasing of the Holy Bible because they understand the significance of these
books and what they mean to the Christians.
It is the ugly politicians, desperate in their attempt to retain their power
and position, who have unjustly politicised a simple issue into an unnecessary
controversy that threatens our unity as a nation. This minority group is
spewing fire and brimstone to agitate and frustrate our unity regardless of the


harm they are causing to our multi-ethnic Malaysia.
In succumbing to these despicable political demands of this minority, the Umno
leadership has become blind to justice and fairness. It has chosen to give in
to this group by refusing to release the Holy Bible with the view to score
political points to win over the rural Malays.

But now with the impending Sarawak elections, the Umno leadership realises the
price it has to pay for this foolhardiness. Hard reality has forced it to be
somewhat sensible and realistic if it aims to cling on to political power.
Without this essential support from Sarawak and Sabah, Umno and its cohorts in
the Barisan Nasional will have to bid farewell to Putrajaya.
So Umno has decided to play politics by agreeing to release the Holy Bible
without loss of face. That is the reason why it has to impose two ridiculous
conditions for the release.
One, the importer of the copies of the holy book will have to stamp “Reminder:
This ‘Al Kitab Berita Baik’ is for the use of the Christians only. By order of
the Home Ministry”. The cover of the Al kitab would be stamped with the
department’s official seal and dated as well.
Two, the importer has to stamp a serial number on each copy of the Holy Bible
“as if to demarcate copies from the released shipment and to enable the book to

be traced back to the port of import”.
The Home Ministry has shown scant respect to these holy books and the Christian

community. The ministry’s ruling is perverse and sacrilegious. Its ruling is
tantamount to ordering the Christian community to desecrate their holy books.
No Christian will agree to observe these absurd conditions.
The inalienable right of a community to practise its religion cannot be
compromised – and should not be compromised. This is the birth-right of a
community – it cannot be surrendered.
The Prime Minister must recognise this serious problem that threatens to
undermine our national unity and must step in as a matter of urgency to avert a


national catastrophe. He must isolate these trouble-makers and preserve our
unity. He owes this to us and the nation. Any failure on his part would imply
that unity is not possible without an alternative government.

Let us be reminded by the wise words of Martin Luther King, Jr: “We must learn
to live together as brothers, or we are going to perish together as fools.”

P Ramakrishnan is president of Aliran
With very warm regards,
RAMA
at Sunday, March 20, 2011 No comments:
Email ThisBlogThis!Share to TwitterShare to FacebookShare to Pinterest 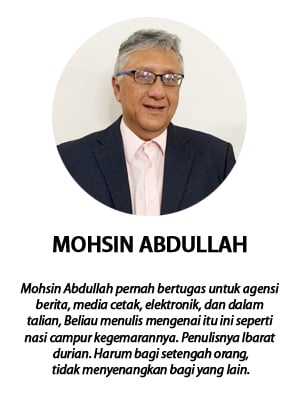