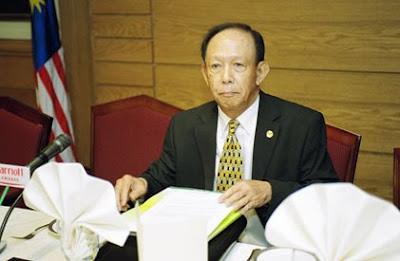 Johor is a home ground of 500,000 of the 3.2 million UMNO members. Johor Bahru is the birthplace of UMNO 60 years ago. Musa’s call will not go well with the Malays’ sentiments, especially in Johor. The irony is that, Musa Hitam himself is a Johor Bahru native. He is an English College alumnus. In 1969, he was sacked as a Junior Minister of Tunku Abdul Rahman Putra’s administration and from UMNO because of his ‘ultra Malay’ stance against the the administration’s lackluster attitude towards the needs and demands of the Malays, being gravely under developed.

It seems Musa is a changed man now. Even his one time partner-in-crime Tengku Tan Sri Razaleigh Hamzah says so. Of course, this call by Musa will not earn points from former Prime Minister Tun Dr. Mahathir Mohamad’s sharp political criticisms, expected in Kulai, next week.

There is a suggestion that a special forum be organised soon, to react on Musa’s call. Anyone could guess, it will not be a pretty place for Musa to hear about it.

By Angus Whitley and Haslinda Amin

Policies that give the racial grouping privileged access to government contracts and guarantee a minimum presence in the workplace may deter foreign companies from coming to Johor, said Musa, who is advising the government on the state’s development.

Contract awards “will have to be on merit,” Musa, the country’s deputy leader from 1981 to 1986, said in a March 19 interview. “The Malays will have to face competition.”

Prime Minister Abdullah Ahmad Badawi is seeking foreign investors to help fund a two-decade, 382 billion ringgit ($109 billion) redevelopment of Johor, bordering Singapore. Scrapping the race-based program could lure investors and pave the way for the country to completely drop its 36-year-old policy in support of ethnic Malays, who comprise 60 percent of the population.

“It would be an exit route, politically,” said Manu Bhaskaran, a Singapore-based partner at economic research company Centennial Group. Johor “is an extremely important project. The affirmative action program and all the related problems do turn off foreign investors.”

Foreign direct investment in Malaysia in 2005 dropped to 15 billion ringgit from 17.6 billion ringgit in 2004, according to the government’s department of statistics. Last year’s figures haven’t been released.

The racial program, introduced under the New Economic Policy in 1971 after clashes between ethnic Chinese and Malays, also known as Bumiputras, aimed to increase the wealth of the nation’s poorest grouping through benefits ranging from cheaper housing to greater access to initial public offerings.

Concern about the policy’s validity grew last year after a report by the Asian Strategy and Leadership Institute in Kuala Lumpur showed the original targets to address the wealth imbalance had been surpassed.

The February report by the Centre for Public Policy Studies, controlled by ASLI, said ethnic Malays may own as much as 45 percent of Malaysia’s corporate equity. That was higher than the government’s estimate of 19 percent in 2004 and surpassed the New Economic Policy’s goal of 30 percent.

ALSI on Oct. 10 last year said there were “shortcomings” in its report. Lim Teck Ghee, director of the Centre for Public Policy Studies, quit a day later to protest the retraction.

“I am confident that this Bumiputra thing, if I may put it this way, need not be the negative factor, and I am stressing this in this particular exercise,” Musa said. “There needs to be a revision, updating, of the way we approach it.”

Incentives to take part in the Southern Johor Economic Region are being finalized, Musa said. Middle Eastern and Japanese investors are among those that have agreed to plow funds into Johor, he said.

The 2,216-square-kilometer development will include roads, offices, homes, theme parks, hotels, factories and hospitals and is Malaysia’s biggest real-estate project. Development of the region will require 382 billion ringgit of investment from 2006 to 2025, according to Khazanah Nasional Bhd., Malaysia’s state investment unit, which is leading the project.

The site will generate more than 800,000 jobs in 20 years, Prime Minister Abdullah said in November. It may boost growth in Johor to an average of 7 percent from 2005 to 2025, compared with 5.5 percent without the revamp, Khazanah said.
at Saturday, March 15, 2008
Email ThisBlogThis!Share to TwitterShare to FacebookShare to Pinterest